The Tennessee Melee top 10 are players you'll definitely want to look out for in your bracket. Tournament in the Midwest or Atlantic South could always have one of these players looking to make an upset. 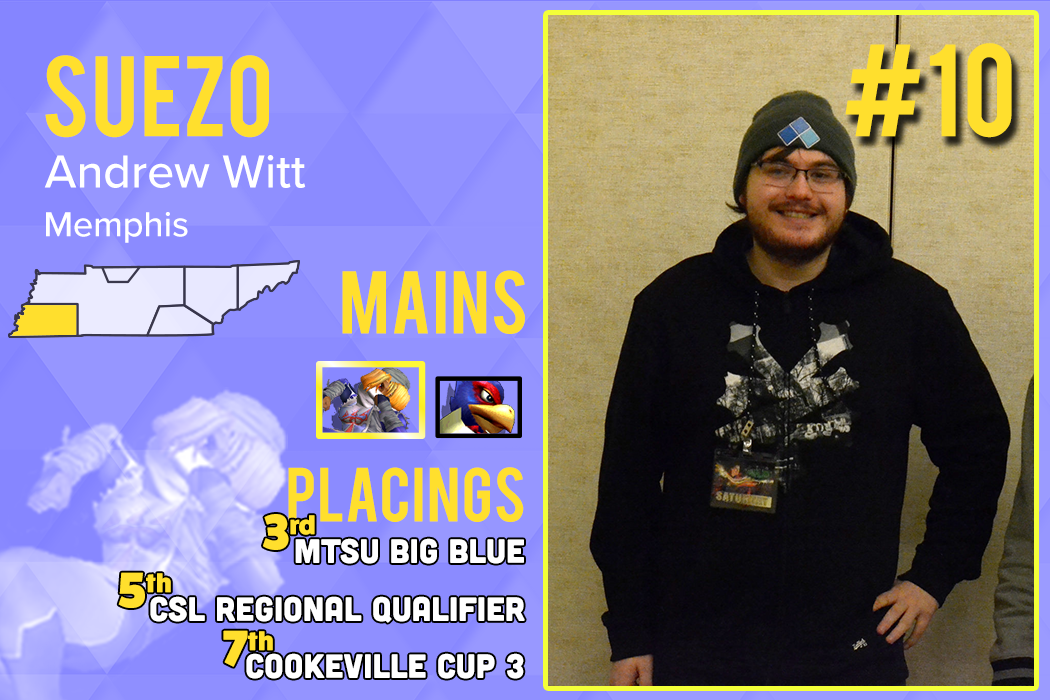 One of a whopping two relevant Sheiks in the state, Andrew Witt AKA "Suezo" AKA "Flexington Steele's" lack of consistency kept him off the top 10 this season. With high peaks such as beating Bobby Frizz hungover, everyone sees the threat Suez poses. Beware the power of a drunken all night anime binge, this Sheik isn’t one to underestimate. -Xtreme 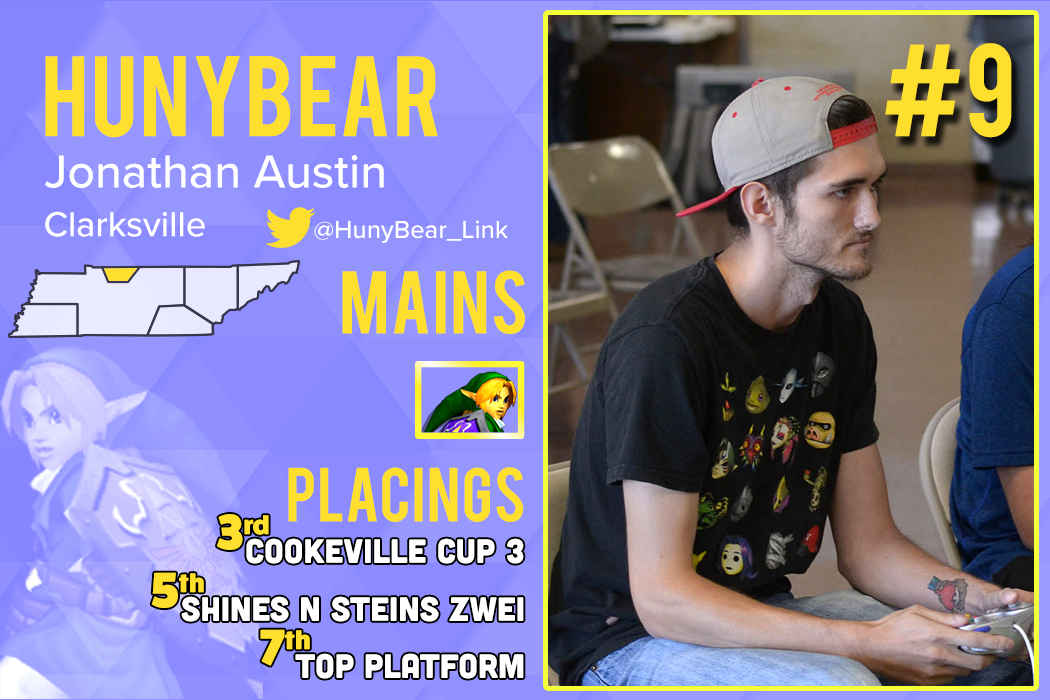 Johnathon “Hunybear” Austin is our low tier hero here in TN. Quite possibly the most lab intensive Link player in the world, Hunybear has been making a name for himself in the realm of link players. He is known for his brutal punish game and absolute lack of moving ever. Seriously, he is insanely good at standing still. Hunybear’s most impressive feat this season was taking a set off top 100 player, Cob at Shines-n-Steins 2. He also has wins over Xtreme, Shiksaslayer and Taqwim. A now perennial PR player, Hunybear will keep looking to optimize his gameplay and push Link as far as he can. -T 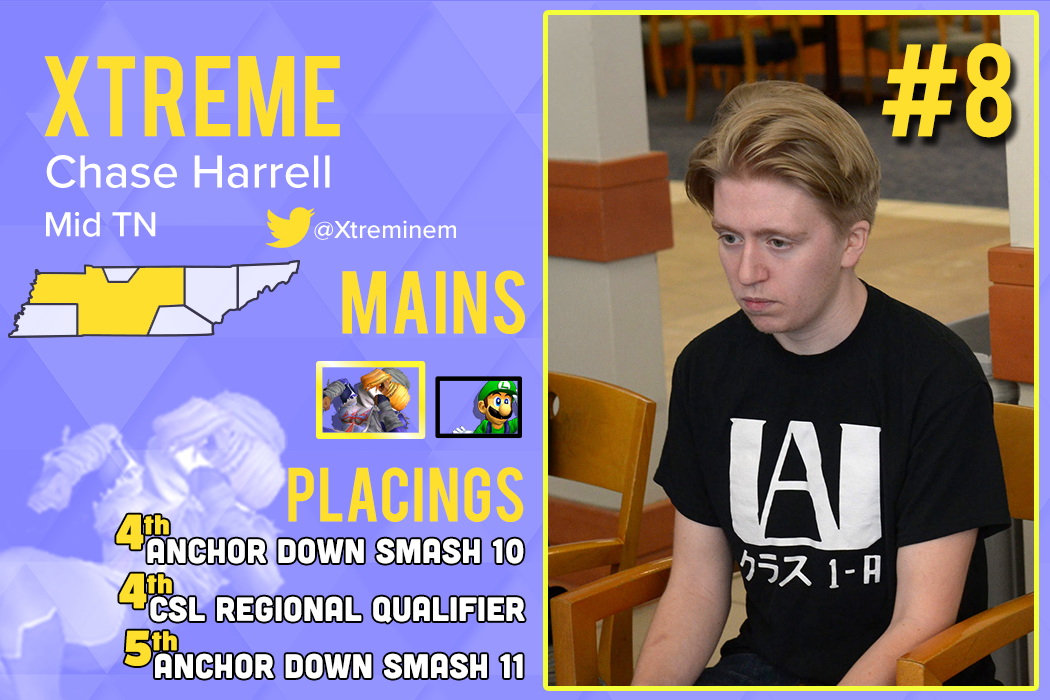 Tennessee's legendary TO Chase “Xtreme” Harrell rules TN with an iron fist. Known for creating “meme” seeds and “spicy matchups” it's best to stay on his good side. A perennial PR player, he is no slouch at playing the game either. Chase is famous for beating every floaty and losing to every spacie. He is also famous for his flowing golden locks and being just twinky enough to make you wonder. If you need to find him at a TN tourney just look for the guy yelling stop your friendlies. -Xtreme 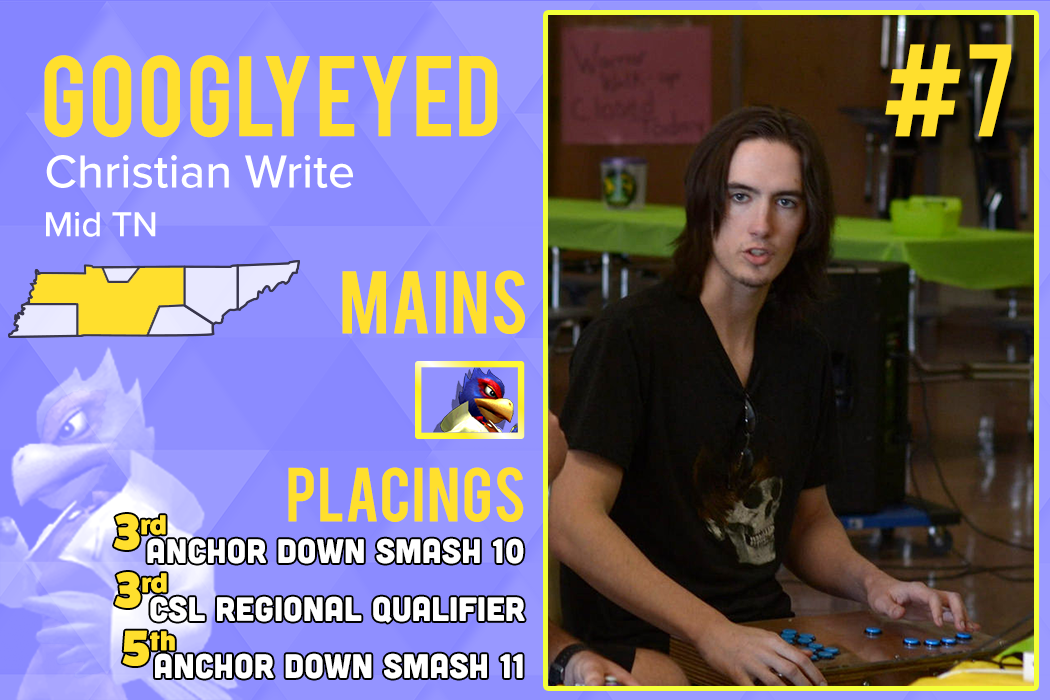 Christian “Googlyeyed” Write returned to PR form this season. With a year of the box and the bird under his belt, his tech skill finally caught up with that big fat brain that let him beat the likes of Slox, Absent Page and Kpan with Marth in years past. When Christian’s not figuring out how to harvest wild garlic for a nice stew, he’s casually racking up wins on Iori, Mewwy, Davemon, Xtreme and more. No one would be surprised to see Christian and his Falco rise back to the same level his marth was at. -Xtreme 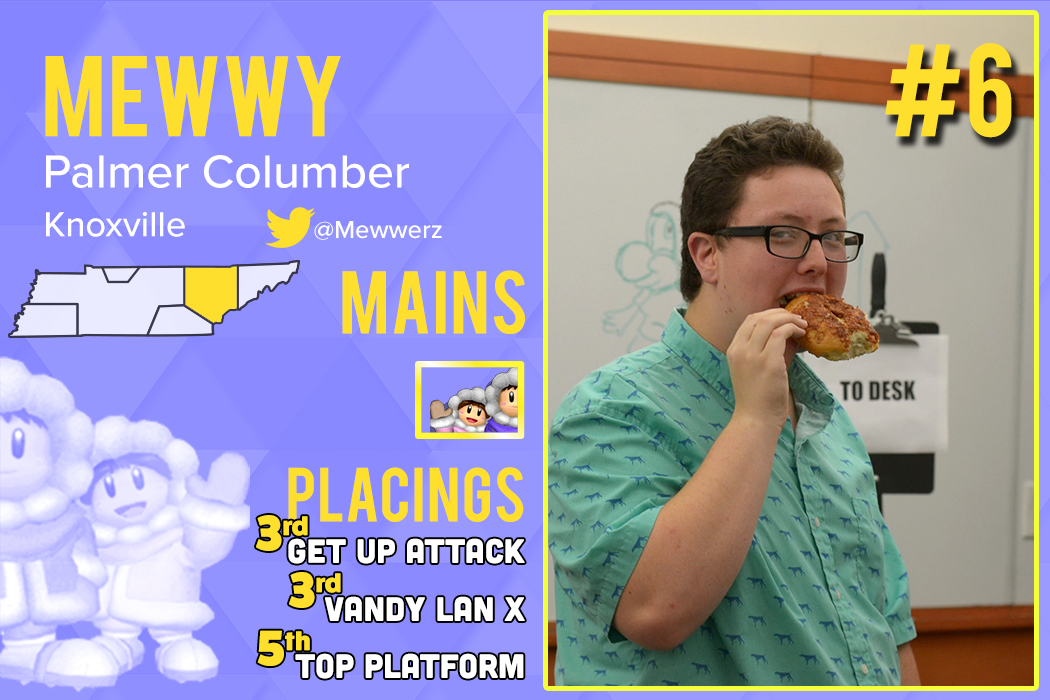 Palmer “Mewwy” Columber WAS our former wobble master from Knoxville, but we banned that nonsense. Sorry buddy! Now with his life in shambles, Mewwy will try to prove to the world that he is more than a drooling A masher. After a rough few tourneys post wobbling ban, Mewwy managed to defeat both Moist and Hunybear in a single tourney at Top Platform. Perhaps we were all wrong, and Mewwy isn't carried? Only time will tell. -T 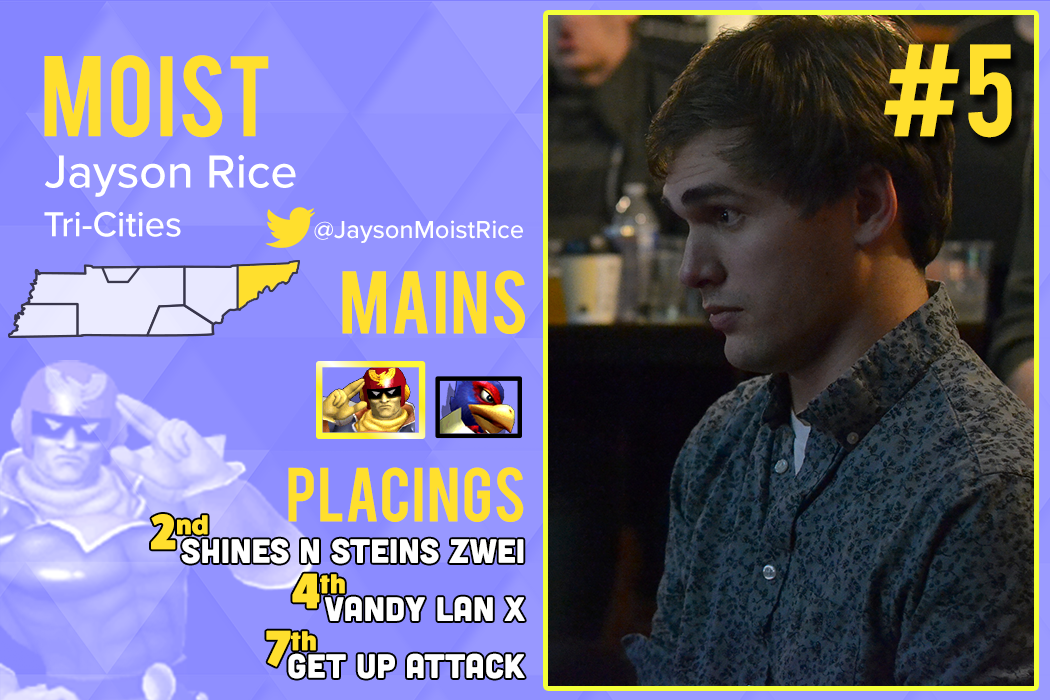 The most electrifying Falcon in smash entertainment, Jayson “Moist” Rice farmed Grab just enough this season to stay in the top 5. Neither him nor his opponent know what he’ll do next. As the sole representative for Tri Cities in the top 30, Moist has a lot on his back. Hopefully, this next season will see him and the homies travel more, as he’s the only thing stopping Grab from ruling TN with an iron sword. -Xtreme 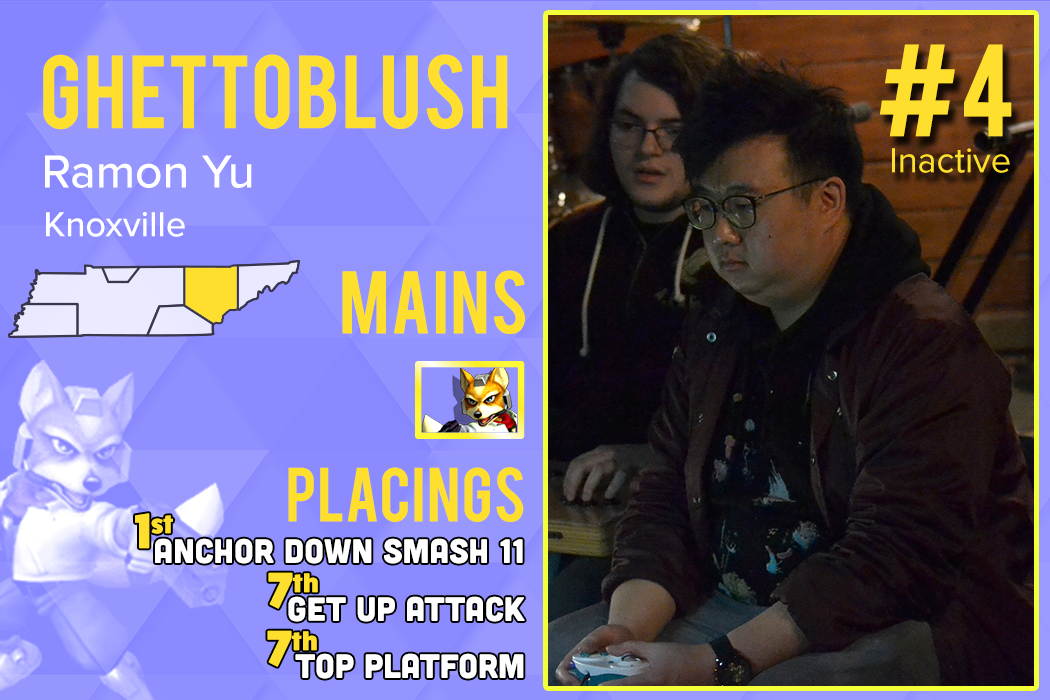 Ramon “ghettoblush” Yu is the ultimate sleeper pick in Tennessee. He's also the Hipster's favorite player in that Bad Melee article from like 2015. He has long ruled the Knoxville scene and recently double eliminated Iori. Ramon is a calm, patient fox main known for beating everyone except Falco players. He is almost certainly a high PR player if he ever decides to attend tournies regularly. Likes: Flip-flops, gym shorts, circle camping floaties, calling people bud. Dislikes: Chase Harell’s seeding, traveling to any tourney more than 20 miles away.  -Xtreme 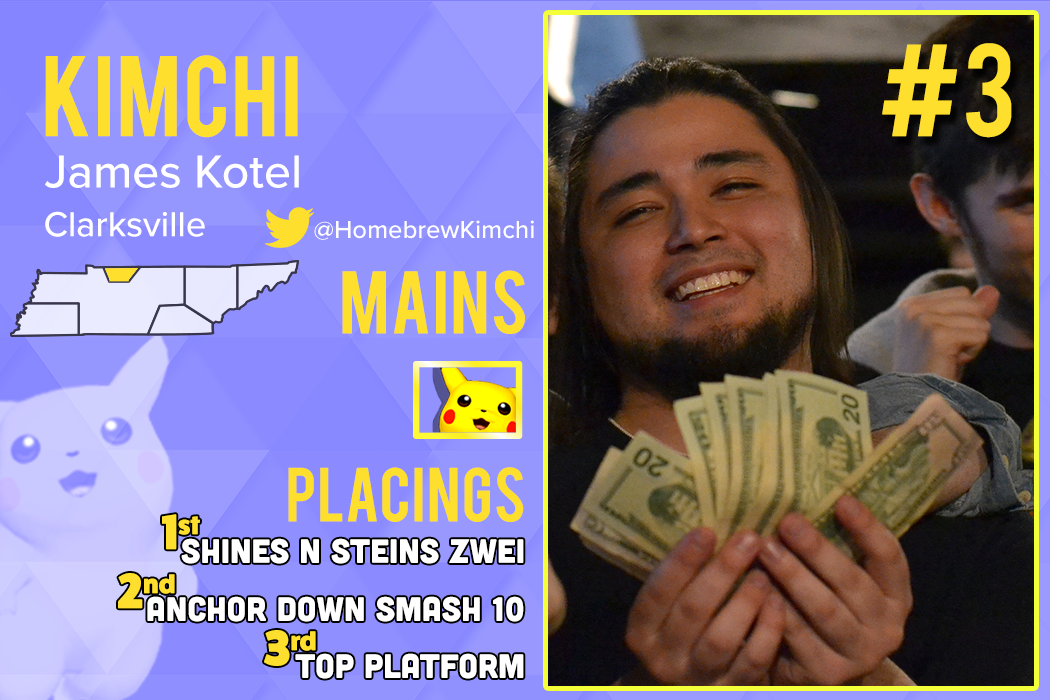 James “Kimchi” Kotel, Yes, he’s the guy who beat n0ne. Yes, it was cool. No, we aren’t going to talk about it anymore. Kimchi is a former Falco player turned Pikachu player. Kimchi has been on a steady rise since his change of mains and has now firmly established himself in the top echelon of TN players. He is still searching for that elusive and all-important Iori win but has defeated everyone else in TN there is to defeat. He is a tourney threat at any TN event he attends and will likely breakthrough the Iori barrier soon. -T 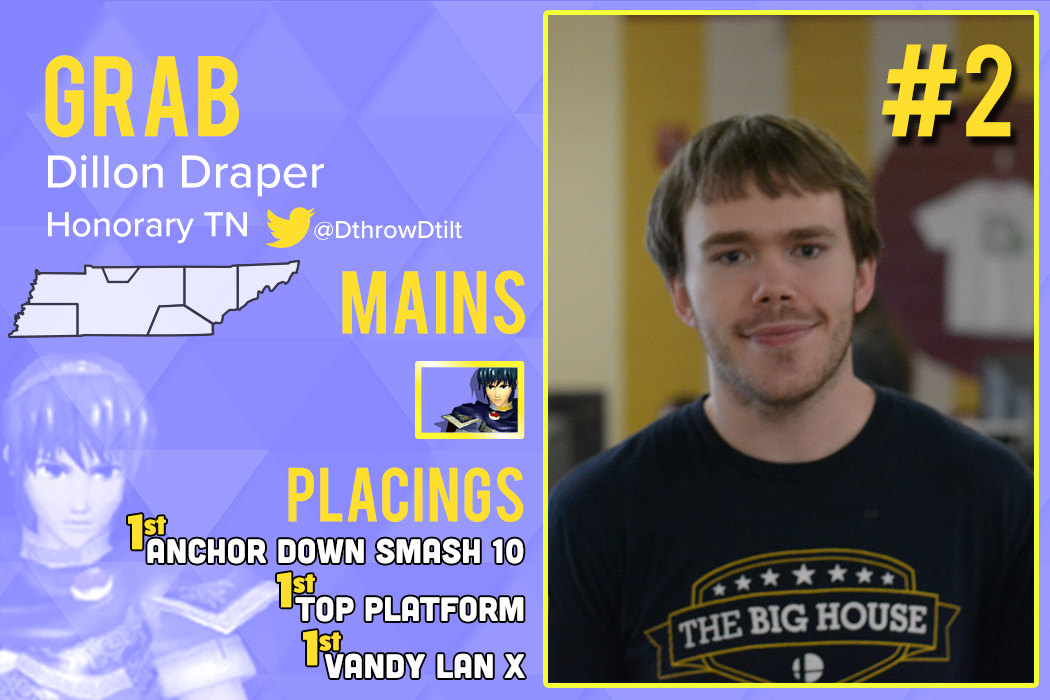 Bowling Green Marth main Dillon “Grab” Draper proved himself two steps in front of the rest of Tennessee over the course of the PR season. He racked up three tournament wins, including double eliminating Iori at Top Platform. However. Grab’s outstanding peaks were also marred by losses to Pikachu and Falcon. If he shores up his gameplans in difficult matchups, and remembers to bring his headphones, it won’t be very hard to envision a new number one in the state next season. -Xtreme 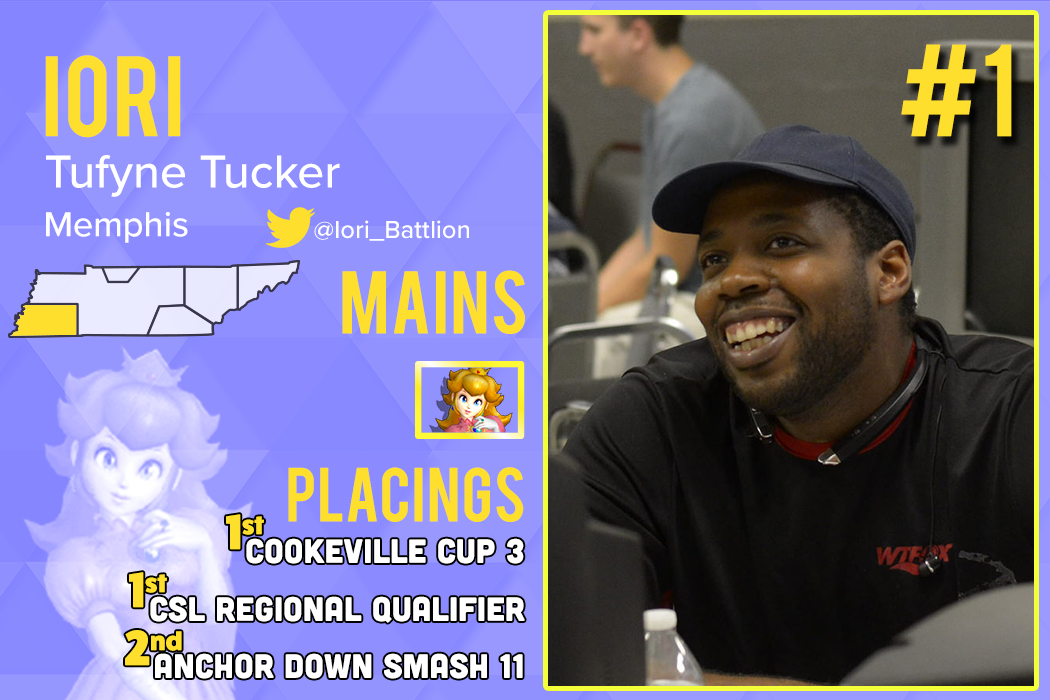 Known  by local players for his malicious mindgames and clever play, Memphis peach main Tufyne “Iori” Tucker continues his dominance of the state. He has multiple top 100 wins throughout his decade long career, placed 33rd at Genesis 1 with Mewtwo, and can play every top tier at a proficient level. However, throughout the season Iori finally looked vulnerable, dropping tournaments to both Grab and Ghettoblush. Aside from a few blemishes, he is still unquestionably number 1 in the state. When it comes to shit talk and spacing, Tufyne reigns supreme. -Xtreme

This project was created to acknowledge the dedicated players you'll want to look out for at Tennessee's SSBM tournaments. These top 30 rankings were directly taken from Winter 2019's TrueSkill™ rankings without committee discussion. The actual TN top 10 PR has some differences due to player activity. Thanks to Chase Harrell for collecting and organizing the data, and to a few other TN players for writing blurbs.