The players on this list are players that are a threat to consistently place top 8 at monthly sized tournaments. It's unsurprising to see on of these players make an upset or two in bracket, but they have a bit farther to push before they can start taking tournaments of their own. 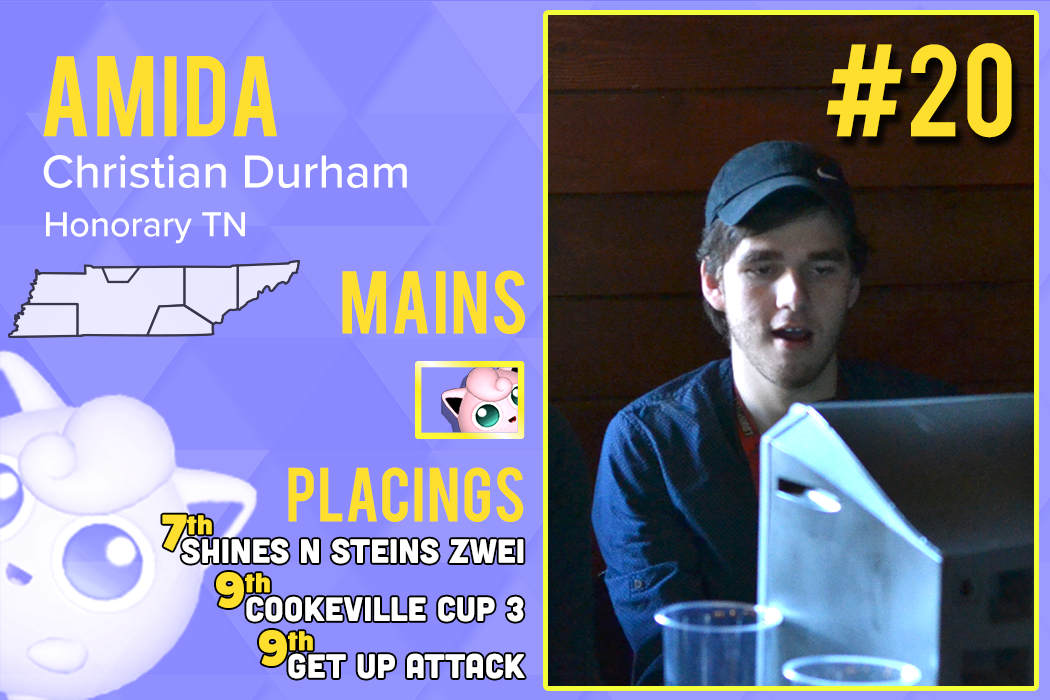 Nobody would say that Christian “Amida” Durham was in top form this season. An honorary member of Tennessee smash, the Kentucky puff main came out of retirement to mixed results and has yet to shake off the rust. However, he racked up solid wins over Shiksaslayer, Emy, Who and Droog. Regardless of his current results, he’s still a scary name to see in your path given past successes of waxing everyone in the state except Iori. -Xtreme 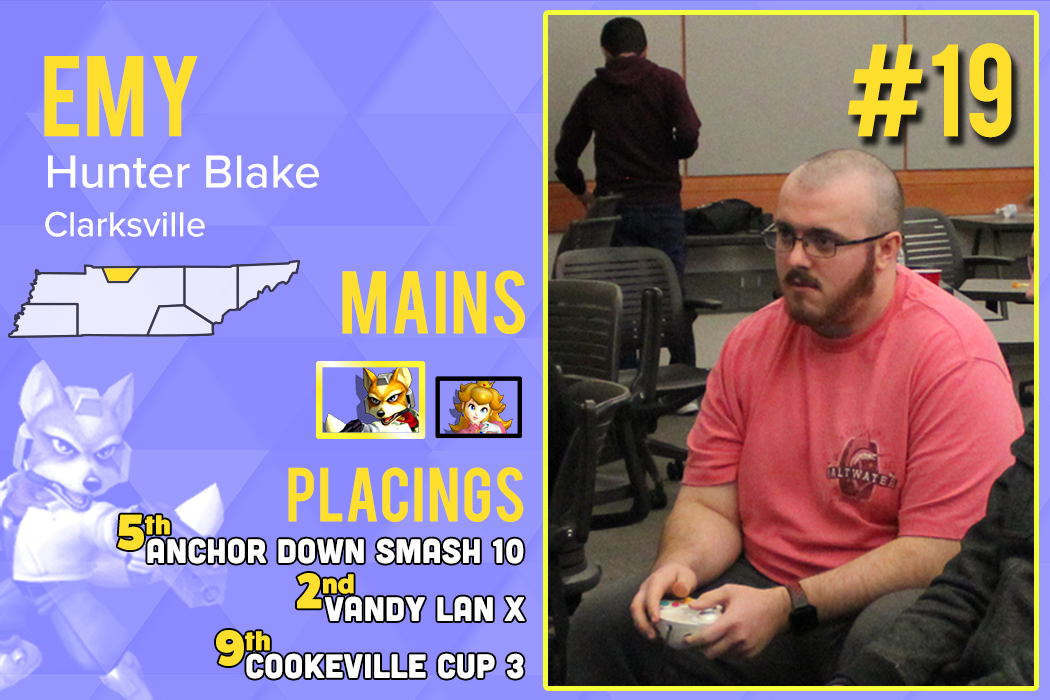 Hunter “emy” Blake WAS a peach main from Clarksville. After yet another disappointing PR season, emy has decided he is now a Fox main. He has had very good results at weekly tournaments with his peach but has struggled to make anything happen at our regionals. After losing to Suezo and Shiksaslayer at the last ADS, emy decided to hang up the Peach shoes for good. Known for beating everyone at weeklies and money matches (including Grab, Davemon, Kimchi, Xtreme, Hunybear, T, etc.) emy hopes to start finding tournament success with Fox. He clearly has the talent. It will be interesting to see if he sticks with Fox and if he can put it all together finally in tournament. Good luck bud. -T 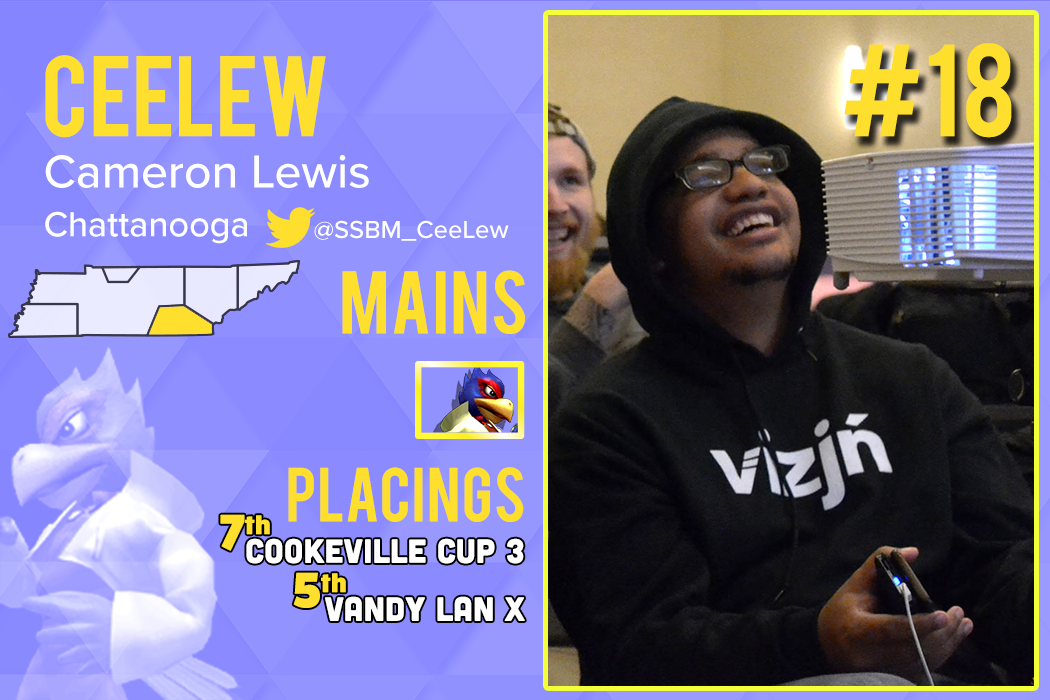 Former Chattanooga honchkrow turned Alabama smasher Cameron “Ceelew” Lewis continued his streak of strong showings within the 10-20 range. In only two tournaments, he racked up wins on Googlyeyed, T, Shiksaslayer and Suezo. Happily married, only time will tell if he sacrifices his home life for the true prize; top 10 in two states at once. -Xtreme 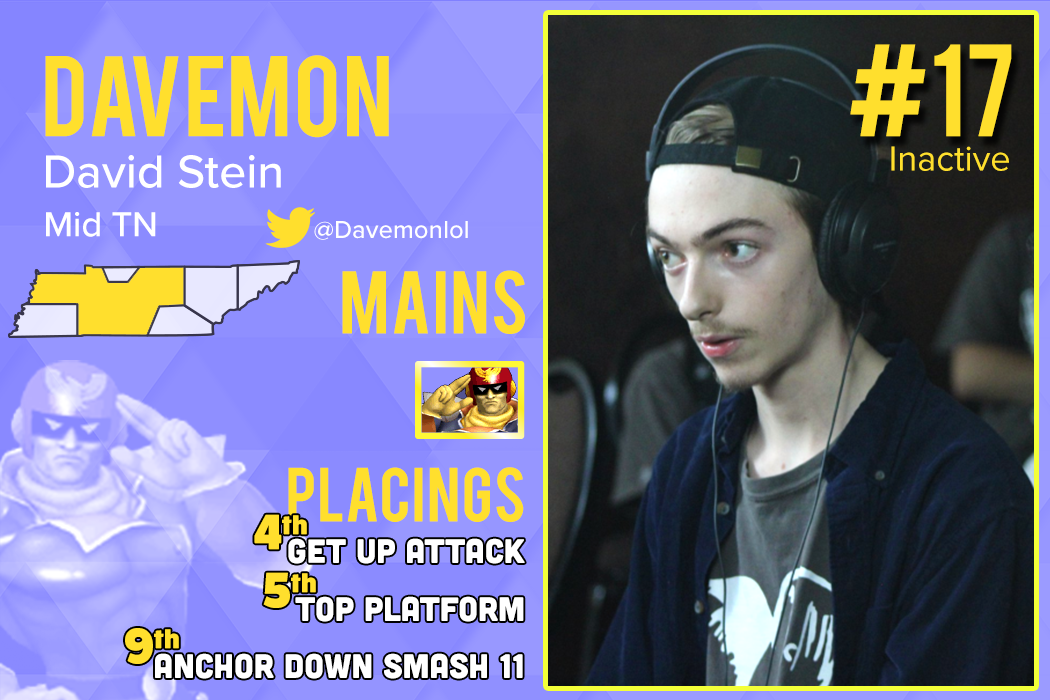 David “Davemon” Steinmeyer is/was a Captain Falcon main who quickly rose up the ranks of Tennessee through hard work and dedication to the game. In his short time playing, he racked up a few top 100 caliber wins in Iori, Abate, and Reeve to name a few. When he was most active, he was consistently getting top 3 at every Tennessee regional he went to and was beginning to challenge Iori for the top spot in Tennessee. Due to unfortunate circumstances, however, his time was cut short by hand problems from frequent play and issues he had from previous endeavors. This hasn’t stopped Dave fully, as he is back to competing, at least a little bit, using a box controller and is working towards getting back on the normal GameCube controller once his hand pains are mostly subsided. His true skill is known by all and we all look forward to seeing what Dave will be able to do when he’s back at full force. -Pbrake 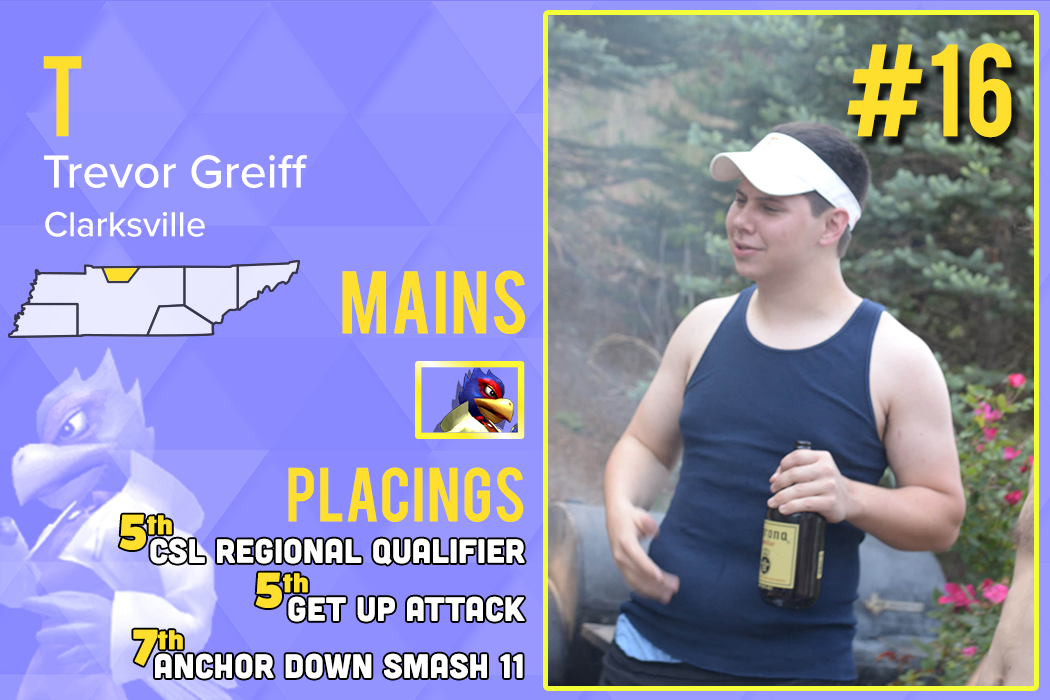 Third best Falco in the state Trevor “T” Greiff crushes his enemies like he crushes miller lites. Known for stellar top platform play and electrifying 45 percent combos, T set out to prove his haters wrong this season, and he mostly proved them right. However, the beak still had lofty peaks, continuing his trend of destroying Davemon and Den while paradoxically losing to Shiksaslayer every time. This panelist has high hopes for the future of T, and if he can begin to overcome his floaty demons, we may be looking at the next top five player in the state.  -Xtreme 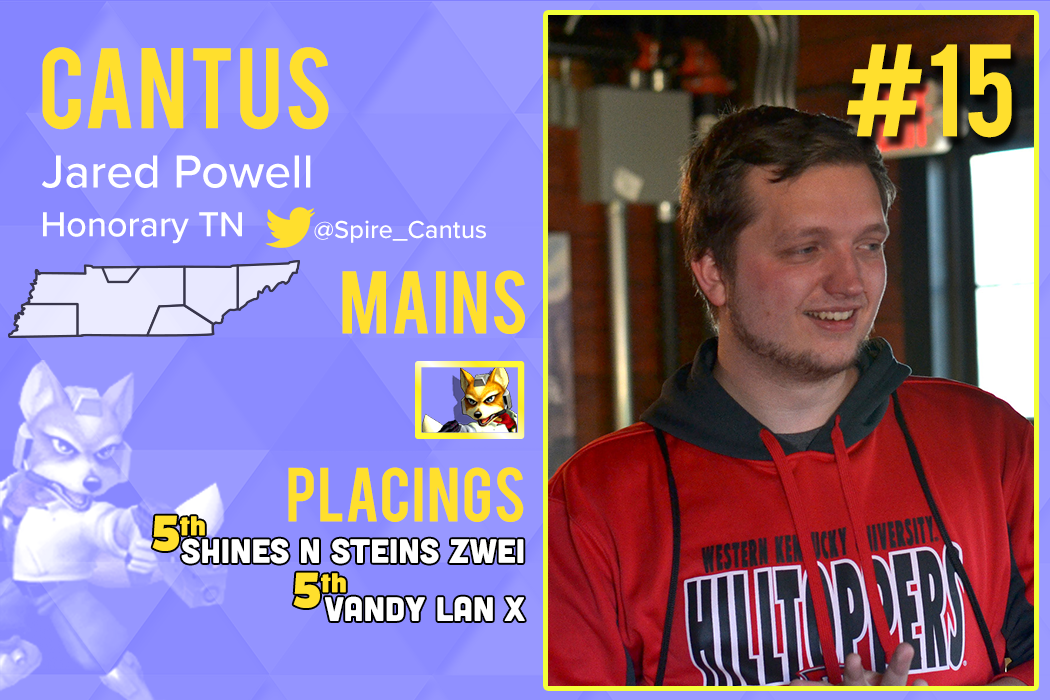 Jared “Cantus” Powell is one of our adopted TN players. Actually from Bowling Green, KY, Cantus has become part of the TN family along with other BG players Grab and Wolven. Cantus is your typical solid fox main. Good technical skill and solid B&B fox play are the staples of his gameplay. Cantus has been on a bit of a break while he was finishing up school, but managed to beat newly minted top 100 player, Cob, at Shines-n-Steins 2. He has also beaten T, Kevo, and Shiksaslayer this season. Cantus, if active, is a serious top 5 contender in TN. -T 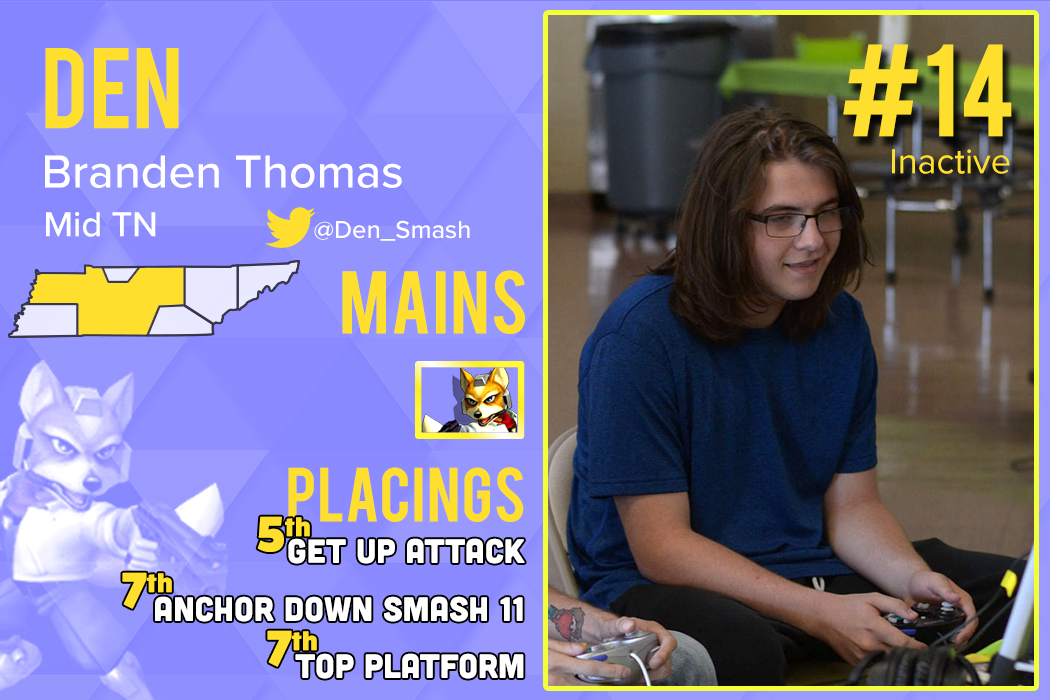 Journeyman Branden “Den” Thomas cut back his attendance to TN tourneys this season. His lack of data comes in part from a move to Tri-Cities for school, and a preference for closer out of state events in North Carolina and Georgia where he hoped to gain experience against different play styles. Don’t let his low rank fool you, Den is still a perennial top 3 threat in state, racking up wins on Mewwy, Kimchi, and Emy, while also taking Iori to game 5. Now, back in middle TN and taking a break from school, he’ll be looking to reclaim his former top 3 status. -Xtreme 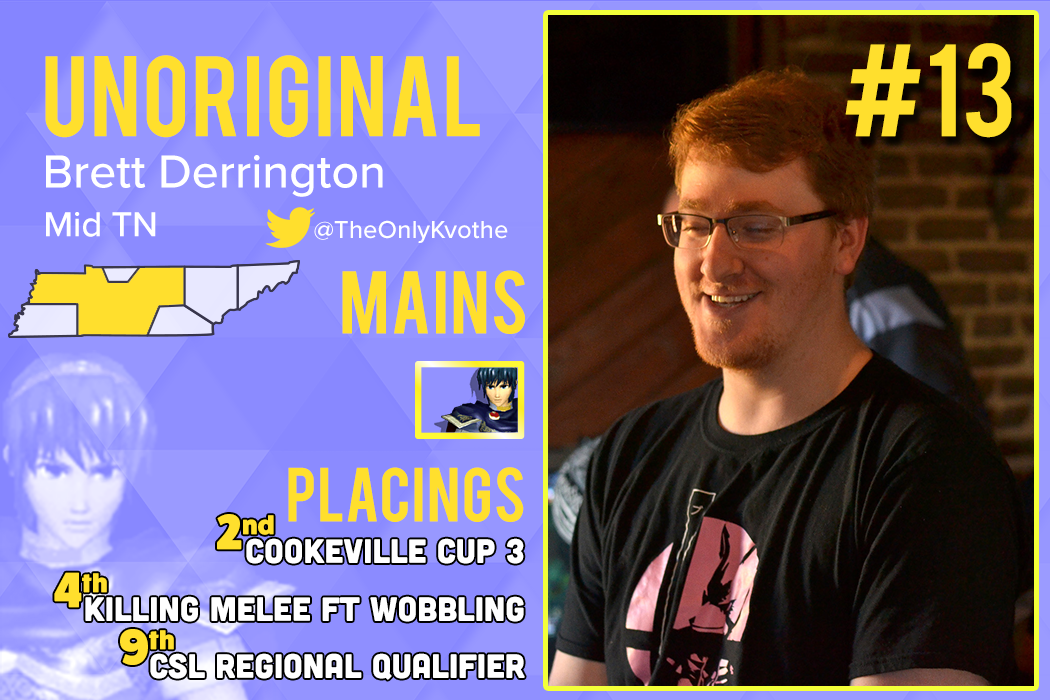 Local alcoholic Marth main Brett “Unoriginal” Derrington returned to peaks of years past this season. Starting off slow, he ended the year hot off getting second at Cookeville Cup over Taqwim, Suezo, and Hunybear. Known as a spacie slayer, Brett showed that when he has the determination to stay sober and remembers to take his meds, all things are possible. -Xtreme 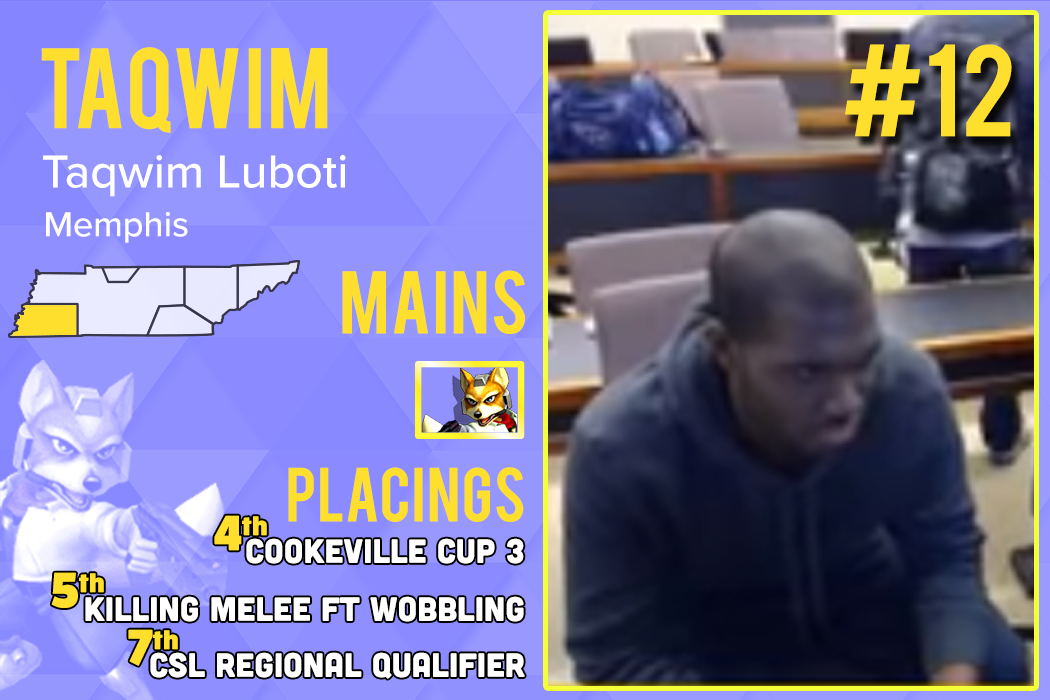 Taqwim Luboti is the quintessential Memphis Fox. Safe and calculated, or in other words, lame. Born in the fires of campy Memphis old heads, Taqwim does what he has to do to survive. A 2-0 record over Xtreme plus wins over Den, Googlyeyed, T, and Unoriginal let the state know that there’s a new threat in town. Once he gets trickier MUs like Pikachu, Peach and Marth down there’s no telling how high the Memphis fox can rise. -Xtreme (Lack of any pictures resorted in a playercam screencap) 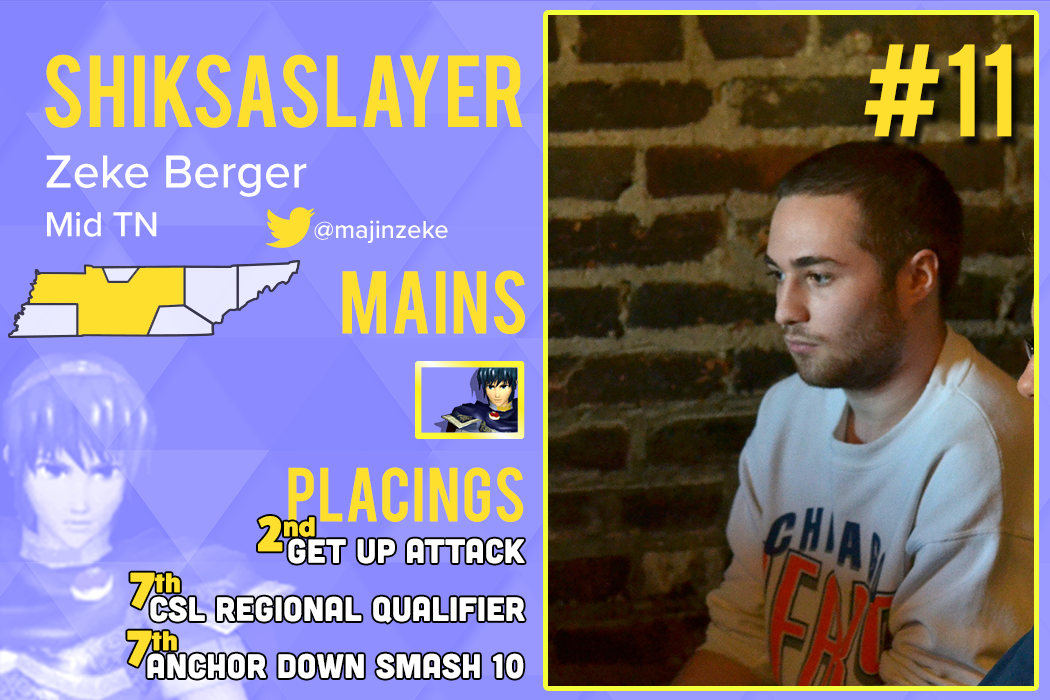 Zeke “Shiksaslayer” Berger’s Marth strikes fear into any player that dare run into a stationary uptilt in the corner. At Get Up Attack he took down ghettoblush, Mewwy, and Grab in route to a second place finish behind Cob. With a reputation as a spacie slayer, Zeke proved this season that there was at least a little more to him. In addition to his GUA run, he also secured wins over Emy, Unoriginal, T and Hunybear. Look for your favorite frat boy to make a deep run at any tournament where he can avoid Xtreme. -Xtreme

This project was created to acknowledge the dedicated players you'll want to look out for at Tennessee's SSBM tournaments. These top 30 rankings were directly taken from Winter 2019's TrueSkill™ rankings without committee discussion. The actual TN top 10 PR has some differences due to player activity. Thanks to Chase Harrell for collecting and organizing the data, and to a few other TN players for writing blurbs.